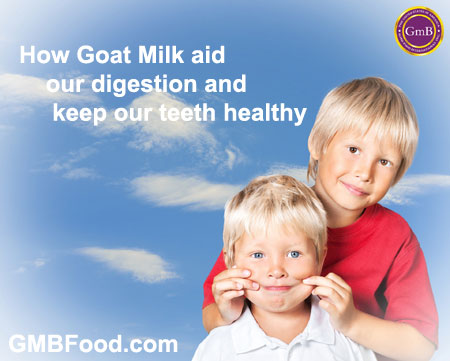 How Goat Milk Aids Our Digestion and Resolves Constipation Problems

As a biochemist, I often puzzled why modern day people are more prone to tooth decay than the people in the old days.  I also noticed that when my son was still a baby, he had serious tooth decay problem as he often fell asleep after being fed with cow’s milk.  I often wondered why we hardly hear older people or people who feed their babies with goat’s milk complaining about tooth decay problem.  All milk naturally becomes sour if it is exposed to air as the fermentation process takes place by the lactic acid bacteria. As the milk becomes sour, the acidity in the mouth increases, and it is corrosive to the teeth. The tooth enamel will be damaged, and the bacteria that can cause tooth decay to begin to strive on teeth and form a sticky film called plaque. In the end, it creates an optimal condition for the bacteria to attack the teeth.  Once the protective enamel is compromised, tooth decay will occur inevitably and quickly.

As we closely examine the composition of goat milk, we found out that there is a considerable difference between goat milk and other milk.  Goat milk is nearly germ-free even when raw as many chemists can often tell whether it is goat milk, human milk, cow milk or any other milk. The reason is that it is more alkaline, which means it’s less acidic, and it has a higher level of potassium and fluoride than other types of milk.  This unusual level of chemical properties helps to suppress the growth of tooth-decaying bacteria.  As you may know that various bacteria constantly compete with their neighbors for space and resources, bacteria can impair or kill other microbes.  In goat’s milk, it has an abundant amount of lactobacillus acidophilus, and this is good bacteria that can always be found in our small intestines. As a result, this type of bacteria may also contribute to the suppression of the tooth-decaying bacteria when people drink goat’s milk.

Food chlorides [chlorides found naturally in food] often found in goat milk can aid digestion as it helps to break down the protein and the assimilation of albumin (a typical type of protein found in food).  It also has numerous fatty compounds such as fatty acids and fats. The fat content in goat’s milk helps our intestines to stay lubricated and relieve constipation problem as well. Best of all, when compared with cow milk, the structure of fat in goat milk is much smaller and less. In this way, goat milk is easier to be digested by our body, and people have less chances of developing conditions such as diarrhea, lactic acid indigestion and vomiting, which are often associated with cow’s milk.

Healthy teeth lead to good digestion, and better digestion means a healthier body.  The goat milk certainly keeps us healthy by assisting our digestion process from the start to the end while providing us high-quality nutrients our body needs.   With these amazing combinations of compounds and their chemical properties, no wonder we don’t see goats become sick that often when compared with other animals.  People who are sensitive or experience lactose intolerance to cow’s milk often find that they can digest goat’s milk. Without the problems of indigestion, it improves the bioavailability of nutrients existing in milk, and as the intestines become more efficient in absorbing the nutrients, the whole digestion process becomes smooth and optimal.  As a result, it keeps us healthy and energetic.

About the Author
Arthur Wang, a book author in pharmacology, had extensive training in microbiology, western medicine and traditional Chinese medicine. He received a degree in biochemistry from UCLA and had studied acupuncture and oriental medicine at graduate level while working in the laboratory in his early career.  He is now an enthusiastic writer on various topics on the internet.
Tags: Chloride, Constipation, Teeth, Tooth Decay