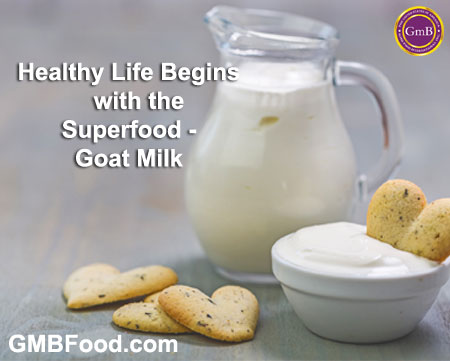 Not all milk are created equal. Throughout the history, there were many stories describing how people get nourished especially by the goat’s milk. In the Bible, Palestine is described as “the land of milk and honey,” and the milk here is referring to goat milk.  In the story of Buddha’s path to enlightenment, he became exhausted and then regained his energy after drinking goat milk. It was a turning point of the story when he realized that hunger and suffering do not help him reach nirvana. Indeed, goat milk had played several significant roles in these ancient histories, which were not a coincidence since people viewed goat milk as something precious that had helped them gain a better chance of survival.

We all know that milk, in general, is nutritious since it nourishes babies, but do you know that goat’s milk stands out among all others because of its unique and amazing combination of chemical properties that other types of milk lack of?  For example, goat milk has more fluorine, chlorine, and silicon than any other milk. Some researchers claim that silica, an oxide form of silicon, can prevent the development of spontaneous diabetes (https://www.ncbi.nlm.nih.gov/pubmed/2981751).  When we talk about these chemicals, don’t think in terms of individual elements.  The bioavailability and biochemistry can be very different when they are taken in as food or as vitamin tablets, a concentrated form. This concept is crucial to understand.  Let’s think of it this way. When you go grocery shopping at the supermarket for the whole week’s supply, do you separate your items into different bags and carry them home or do you just dump all the items in a big bag or the back of your truck? Our body is very picky about what carrier you use to deliver those nutrients and how these substances are processed. If you bring all the nutrients in one carrier, our body will dump them right away.  This may explain why vitamin supplements do not work well for our body in terms of bioavailability.  Most of the vitamins taken in this way would be driven out immediately because of its high concentration, which poses a threat to the delicate balance in our body.  As a result, our body will try to excrete them as soon as possible since they do not come in the desired form and there is no way to properly store these unnatural elements. On the other hand, goat milk exists in the best form which is by nature intended for bodily consumption.

The goat milk also contains a variety of fat that our body needs, such as myristin, stearin, palmitin, olein, glycerides, caprinin, butyrin, butin, caproin, and caprylin.  Studies have shown that both myristin and olein help our body maintain the structure of nerves and brain cells, which may have a positive effect on dementia and Alzheimer’s disease.  Many people even claim that goat milk improves their memory.  When compared to cow’s milk, the structure and size of nutrients in goat’s milk are smaller, and it has been proven that the latter is more digestible and that people who are intolerable to cow’s milk can still consume goat’s milk without any complaint.

Have you seen goats climbing rocks in the mountains? In fact, they are the best rock-climbing animals. They can leap gracefully from rock to rock without losing their footing.  Their strong joints give them advantages to perform these unbelievable acts.  The secret lies in the goat milk.  In the wild, baby goats begin to climb in just a few days old. When examining goat milk closely down to its chemical property, we found that it contains a high level of food sodium. The sodium itself does not necessarily help the tendon or joint directly to gain such ability, but rather maintain the optimal environment for the joints to work well and stay healthy.  According to many research, much of sodium is stored in stomach wall and joints.  People who have arthritis usually have calcium deposit in their joints.  This occurs when food sodium is in shortage, and the body will then allow calcium instead of sodium to be deposited in the joint.  Dr. Bernard Jensen, an expert on goat milk, had treated his patients with goat milk and saw the process of calcium deposit is reversible, and calcium will dissolve back into solution in the lymph when sodium come in as a replacement.

From ancient to present, goat milk stands out from all other food. With a variety of nutrients, it has been turned into various products including cheese, yogurt, and buttermilk. Goat milk also has been used as a replacement for mother’s milk for infants when they are sensitive to other milk.  It has been known as treatment for certain illnesses since the ancient time. Realizing what goat milk can do, we have no doubt as to why it is called the superfood. This may also explain why goats are less prone to disease than any other domestic animals.  Goat milk is indeed a superfood and truly a blessing to mankind.

​About the Author
Arthur Wang, a book author in pharmacology, had extensive training in microbiology, western medicine and traditional Chinese medicine. He received a degree in biochemistry from UCLA and had studied acupuncture and oriental medicine at graduate level while working in the laboratory in his early career.  He is now an enthusiastic writer on various topics on the internet.